Korean KJ Choi may have just fallen short of winning a Major but his performances in The Masters Tournament, which tees-off at Augusta National Golf Club tomorrow, were an inspiration to Asian golfers and paved the way for players from that continent to continue where he left off. We look back at the two memorable Masters that could have easily seen the Korean don on a Green Jacket.

When Korean Sungjae Im tied for second in last year’s Masters, five shots behind American Dustin Johnson, there was no doubt the result – the best finish by an Asian at Augusta National Golf Club – had its genesis in the genius of his illustrious compatriot KJ Choi.

Choi, much to the disappointment of millions of his fans, never won a Major but he went further than any other Asian had gone before in the Majors by finishing in the top-10 on six occasions. He was a pathfinder for Asian golf and his lack of silverware in the Majors was compensated for by eight victories on the PGA Tour – most notably The Players Championship in 2011. 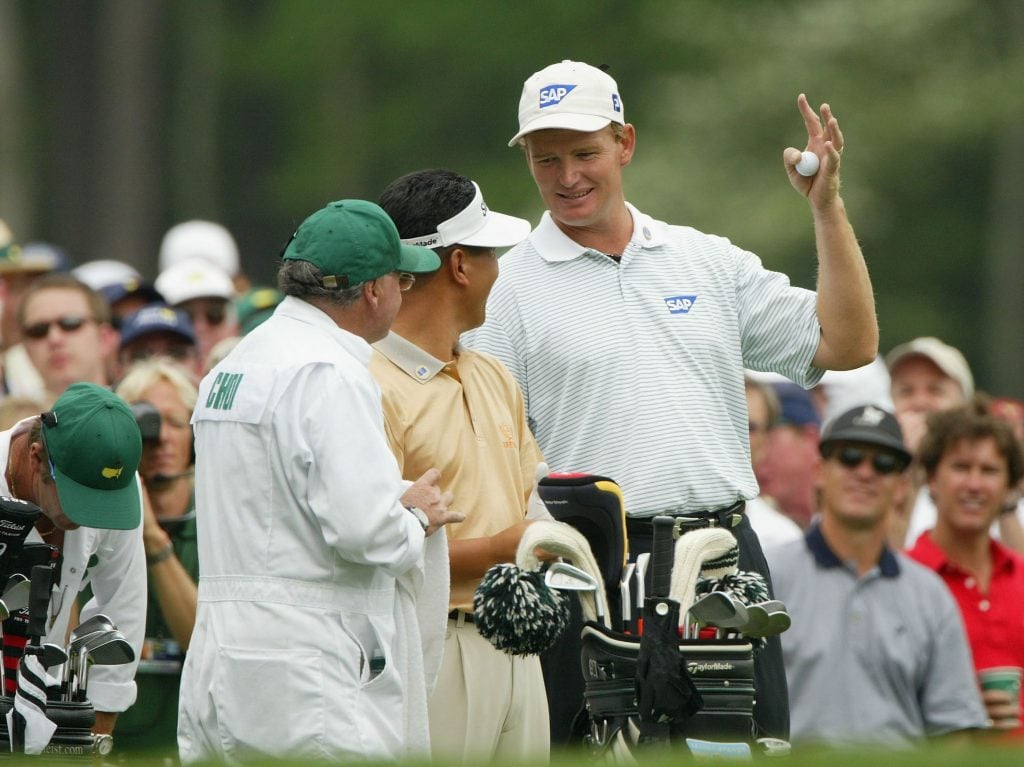 AUGUSTA, GA – APRIL 11: Ernie Els of South Africa chats with K.J. Choi of Korea on the 12th tee during the final round of the Masters at the Augusta National Golf Club on April 11, 2004 in Augusta, Georgia. (Photo by Andrew Redington/Getty Images)

And although his friend and countryman YE Yang spoilt the party at the Choi hacienda by becoming the first Asian to win a Major, when he triumphed in the 2009 US PGA Championship, it was Choi’s results in the Majors there were perhaps the greatest inspiration for players from the Far East.

To be more specific, it was his heroic play in the Masters that acted as a beacon of hope for the next generation.

Most notably, it was his third-place finish in the Masters in 2004 and equal-fourth placing in 2010 that will be long remembered. 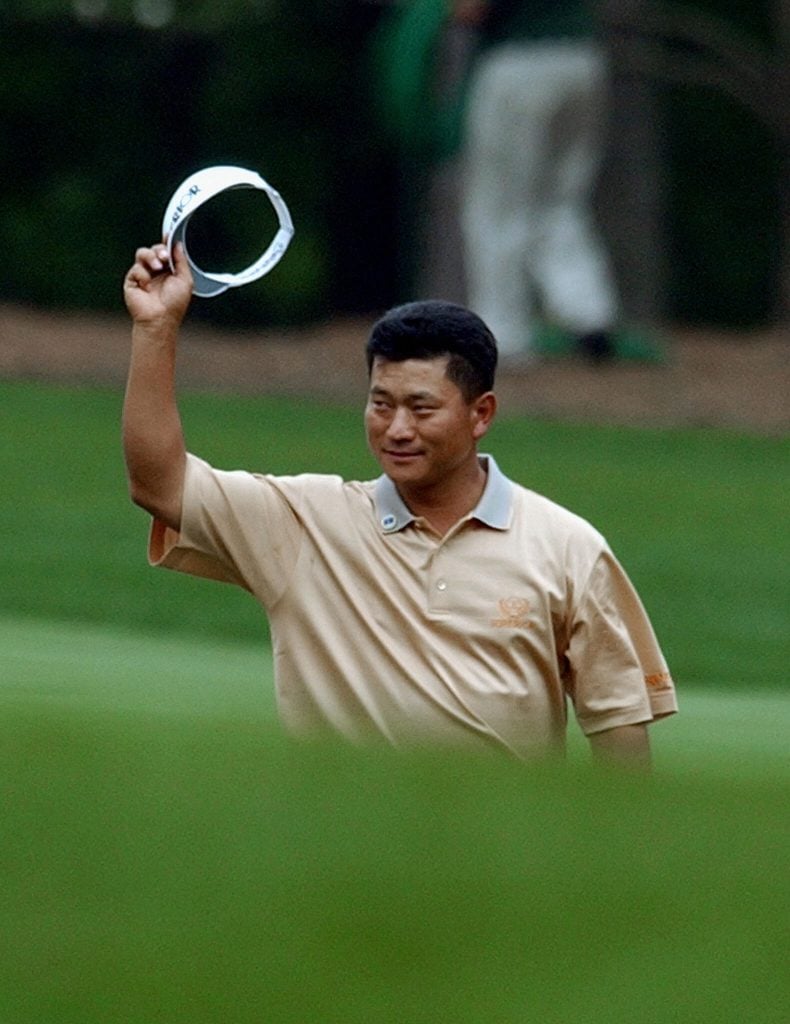 AUGUSTA, UNITED STATES: K.J. Choi of Korea tips his hat on the 11th fairway after after his eagle during final round action of the Masters Golf Tournament at Augusta National Golf Club 11 April 2004 in Augusta, GA. Choi started the round at 3 under par. AFP PHOTO/Stan HONDA (Photo credit should read STAN HONDA/AFP via Getty Images)

In 2004, Choi had Asian fans on the edge of their seats when he shot 31 on the back-nine on Sunday to finish three shots behind American Phil Mickelson. South African Ernie Els claimed second, one behind the winner.

Choi, playing with Els, began the final round three shots off the lead and struggled on the front nine with two bogeys, making the turn in 38. But a pure five-iron on the 11th – the third most difficult hole of the week – changed everything for the Korean.

His ball rolled straight into the cup for an eagle, only the third eagle on 11 in Masters history.

A remarkable performance considering he made his debut in the event a year earlier, finishing in a for 15th, demonstrating his immediate affinity for the tournament.

“More years, more experience, more comfortable,” said Choi at the time, who opened with a front-nine 30 on Friday to tie a course record.

The six-time Asian Tour winner added: “This is going to help me positively with my swing and the development of my game.” 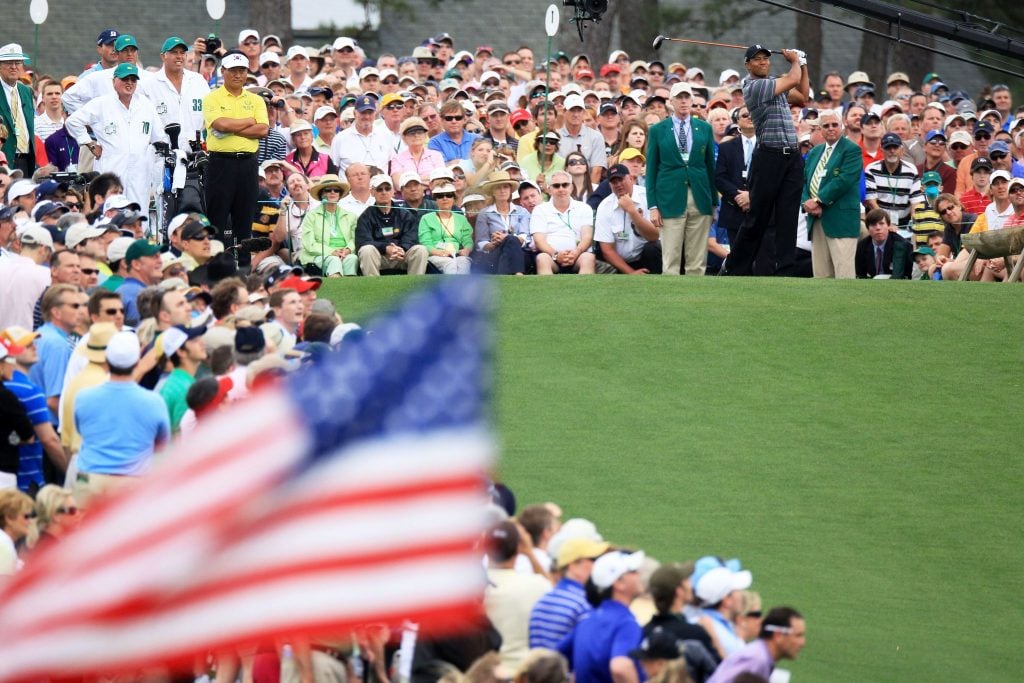 AUGUSTA, GA – APRIL 08: Tiger Woods (R) plays his tee shot on the first hole as K.J. Choi of Korea (L) and a gallery of fans look on during the first round of the 2010 Masters Tournament at Augusta National Golf Club on April 8, 2010 in Augusta, Georgia. (Photo by David Cannon/Getty Images)

Starting the day four strokes behind overnight leader Lee Westwood from England, he briefly joined Mickelson in a share of the lead with eight holes to play before slipping back with bogeys on 13 and 14.

He retaliated back with a birdie at the 15th but that was where the rally ended. He returned a 69 to finish in a tie for fourth with American Tiger Woods, five shots adrift of Mickelson, who claimed his third Green Jacket.

Choi fittingly summed up what the result really meant: “In the past … the mindset of the Asian players was that when it comes to the Masters, there was a fear factor there, that we can’t do it. 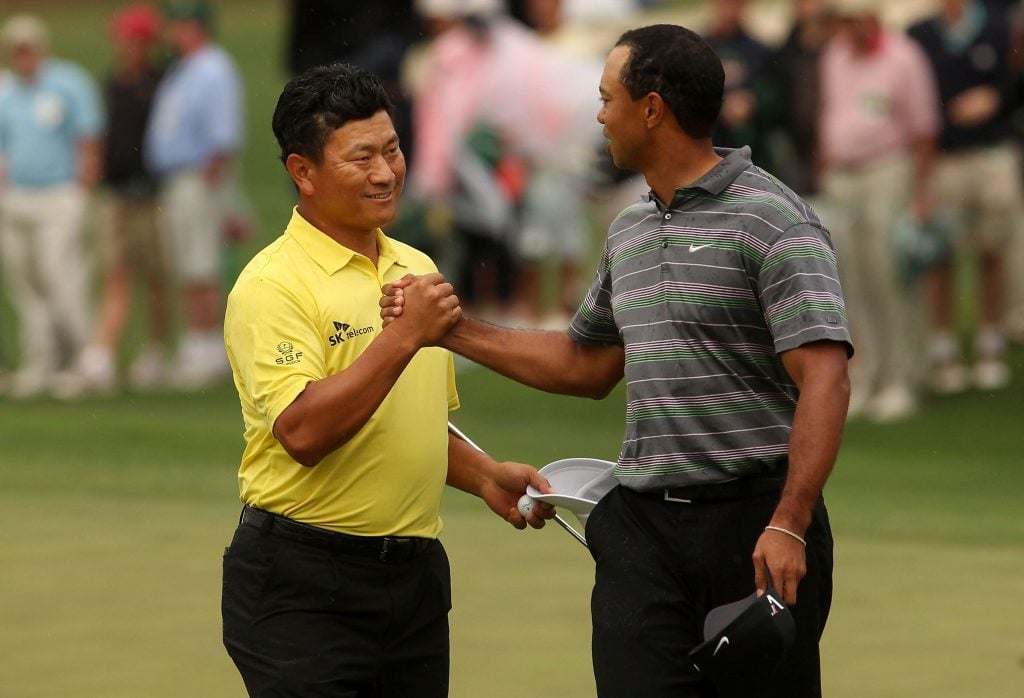 AUGUSTA, GA – APRIL 08: KJ Choi of South Korea (L) shakes hands with Tiger Woods on the 18th green during the first round of the 2010 Masters Tournament at Augusta National Golf Club on April 8, 2010 in Augusta, Georgia. (Photo by Andrew Redington/Getty Images)

“Now I hope that this gives motivation for the younger players, other players, that they can do it at big tournaments like the Masters.”

Choi had the added pressure of partnering Woods for all four rounds as the world number one made his return after admitting to a string of extra-marital affairs.

“It was exciting like 2004, but only this year I think it was, on a personal level, it was better for me because my playing level has improved a lot compared to 2004,” said Choi.

“I think it was more gratifying for me this year and the fans were very supportive and just playing with Tiger for the last four days it was a very good experience for me.”

Choi will not be playing in the Masters this year but four Asians will be competing: Im, Chinese-Taipei’s CT Pan, Japan’s Hideki Matsuyama, and Korean Siwoo Kim.

Pan thrilled his army of fans back home by finishing equal seventh last year; Matsuyama enjoyed a best finish of fifth in 2015; while Kim was tied 21st in 2019.

15 Apr 2021 21:00Nebraska Men's Basketball
Huskers Host Git-R-Done Invitational
Yesterday 09:56TheSun.co.uk
Eamonn Holmes is having daily sessions on a circulation booster to help him walk as he battles chronic pain
Yesterday 17:18MercuryNews.com (sports)
Bay Area TV Sports: What to watch on Sunday-Monday
16 Apr 2021 17:28Toronto Star
Power Drive: How women are growing golf in Canada to never-before-seen levels
Yesterday 12:07TheSun.co.uk
Mike Tyson heads to Arnold Schwarzenegger’s house for a game of chess and golf along with UFC legend Henry Cejudo
Yesterday 13:50TheSun.co.uk
Watch as wild brawl breaks out on golf course as one shirtless man attacks another with flagstick in charity fundraiser