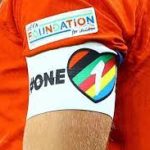 November 23 – Germany’s football association (DFB) is examining whether FIFA’s threat to impose sanctions against players who wanted to wear the ‘OneLove’ armband at the World Cup is legal.

The armbands had been viewed as a symbolic protest against laws in Qatar, where homosexuality is illegal.

Captains of several European teams had planned to wear the rainbow-themed armband as part of a campaign for diversity during the tournament but backed down after FIFA’ s threat  of disciplinary action.