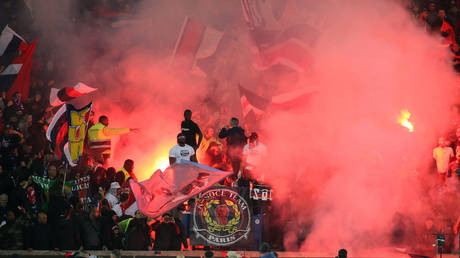 The head of the Ligue de Football Professionnel (LFP), Vincent Labrune, has predicted fan deaths in the French domestic game if clubs don't "get criminals out of stadiums" and violence at matches continues.

France's recent 2021-2022 season was plagued by trouble from beginning to end, with Saint Etienne supporters storming the pitch and throwing smoke bombs when their side were relegated from Ligue 1 in the most recent incident of trouble in late May.

In an interview with L'Equipe published on Saturday, Labrune lamented how it was a "miracle" that no-one had been killed in the confusion, and added: "I don't want to know about a death in a stadium as president."

Labrune conceded that the recently-finished campaign in France was "disastrous on and off the pitch", and stressed that Ligue 1 wants to be known as the "Development League" and not the "War League".

"I appeal to all of you, to your responsibility. You have to be brave and put these criminals where they belong, not in stadiums," he said to the country's clubs.

Labrune warned that French football has to "change gears very strongly", vowing that while his organization is going to take its own responsibility, clubs "must also take theirs and be aware that they must help us, as well as the public authorities".

"It bothers me when I hear the ANS (national association of supporters) say that there are good and bad supporters, good and bad ultras," Labrune confessed.

"No, there are supporters and ultras. I really like the positive fervor of the ultras, but today there are criminals in our enclosures. We have to get them out of stadiums," he demanded.

A day before the Saint Etienne incident, France came under further scrutiny when chaos occurred in the Saint Denis region of the French capital Paris before and after the Champions League final.

As fans were left waiting up to two hours to enter the Stade de France and see the delayed final between Liverpool and Real Madrid, amid reports of some punters rushing the gate, local police were filmed administering tear gas on some of those, including families, who had valid tickets.

At full time, there were then accounts of armed and organized gangs mugging matchgoers which has led to calls for investigations by both the victors Madrid and their opponents Liverpool, who were incensed by French sports minister Amelie Oudea-Castera blaming "30,000-40,000" of their number for arriving without means of entering the stadium legally.