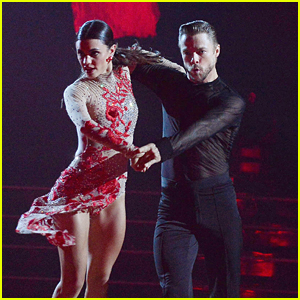 Derek Hough and Hayley Erbert set the floor on fire during their special performance on tonight’s episode of Dancing With The Stars on Monday (October 19).

The longtime couple hit the ballroom for an amazing paso doble in the middle of the celeb performances.

This marked the first time that Derek performed on the show since 2017, as he departed the franchise after competing in season 23 with Marilu Henner.

They had placed sixth in the competition then.

“Tonight I’m performing on the @dancingabc floor for the first time in over 3 Years, and I wouldn’t want to be dancing with anyone else,” Derek posted on Instagram just ahead of their performance with a photo of him with Hayley.

If you missed it, Derek and Hayley addressed the engagement rumors in a new vlog together over the weekend. See what they shared here…