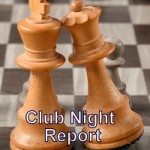 Rishi Vijayakumar J10 and Ramit Kanodia J14 both win their respective semi-final matches to make it an all junior Random Knockout final! I don’t think that has happened before and what an achievement by both players!

Rishi is on fire this season, while Ramit is having one of his best seasons so far!

Rishi beat Andy Rowe in his semi-final match. It was a tough one as Andy seemed to be getting the upper-hand, but some how lost his way and Rishi was not going to give Andy a second chance!

Ramit had a tough battle against Colin “War of attrition” Young who never gives you anything for free! Ramit did well to keep Colin at bay and while Colin may have had the better of it, the cost was time as Colin found himself with less than a minute to Ramit`s 23 minutes! Father time is unforgiving and in the end Colin fell on his own sword as Colin learnt the hard way that, “time waits for no man”!

For all the results and fixtures, click the link below.