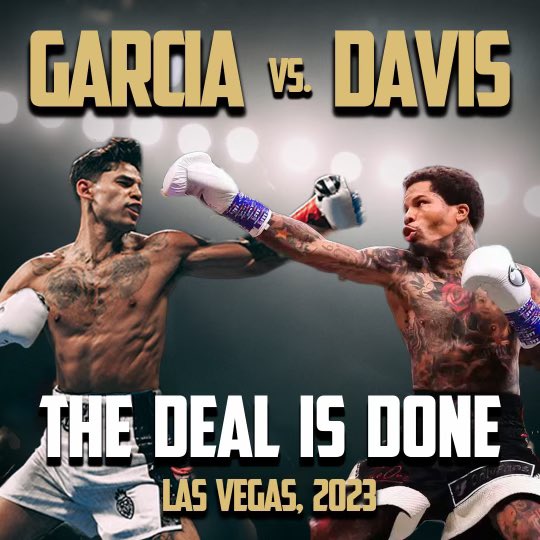 "I’m so pumped this fight is finally in place," Ryan Garcia tweeted on Thursday afternoon. "I want it more than anything right now. I’ve put in the work, I’m at the prime of my career, and I know I’m going to be the biggest boxer in the world. That legacy starts today." Under that statement was a picture of Garcia and Gervonta Davis squaring off with the title "The Deal is Done Las Vegas, 2023." Davis himself also took to social media Thursday. "DONE DEAL!!!!!!!!!!!!!," he posted on Instagram. "TELL EM GET THE BRINKS TRUCK READY MF!!!!!!!!" Like Garcia, Davis placed an accompanying fight photo with his post.

If this news is true - and at this point it's hard to imagine that it wouldn't be, one of the most anticipated matchups in boxing, if not THE most anticipated matchup, will be going down next year. Reports are the Davis-Garcia fight would go down next April. Las Vegas will clearly be the location, though exactly where and on what date the fight will occur has not yet been announced. The matchup will most certainly be a pay per view event.

This is much needed news for fight fans, as the last several months have been brutal for the sport. First, a hoped for fight between Tyson Fury and Anthony Joshua fell through. Then negotiations for the long awaited Terence Crawford-Errol Spence undisputed welterweight championship bout fell through. Indeed, some were rightfully wondering whether boxing's longstanding age of major matchups was coming to an ignominious end. A Davis-Garcia fight would clearly buck that trend. It might also bring in a ton of money and eyeballs, as both fighters are known how to draw in fans. They're also both young, undefeated, and incredibly hard hitting.

"Boxing NEEDS this fight right now," Garcia tweeted shortly after announcing that the deal was done. "It’s time for us to get back to what made this sport so great for the fans: Glamorous fights in places like Las Vegas, grudge match storylines, and most importantly — the best fighting the best." Credit is due to both fighters and their respective camps for making this one happen. Although the fact that major fights simply not getting made has been infuriating, there's no doubt that setting one up successfully is a true challenge in an age of battling promotional and broadcasting outlets. The sport needed this.

The post Tank Davis-Ryan Garcia: “The Deal Is Done” appeared first on BoxingInsider.com.