BOXING fans all said the same thing after seeing the Iranian Hulk’s dreadful display in the ring.

The social media sensation – who was due to fight Brit Martyn Ford earlier this year – finally made his boxing debut on the latest Wicked N’ Bad card in Dubai.

And Gharibi’s lack of experience and preparation for the short-notice bout was evident from the get-go.

The 30-year-old could barely throw a punch and showed absolutely no defence in the first round – in which he repeatedly turned his back to his opponent.

The ref gave Gharibi a time-out in the first and the Iranian briefly traded blows with his rival after the brief intermission. 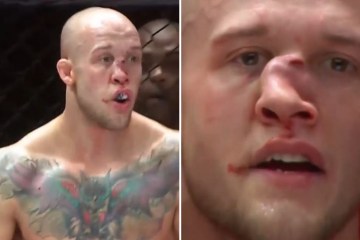 But he soon found himself slumped in the corner after being dropped by a right hand from Titan – real name Almat Bakhytovich – which prompted the ref to wave off the contest.

Footage of Gharibi’s bout travelled quickly on social media and fight fans didn’t hold back with their opinions.

One said: “Somebody please pay Iranian Hulk to never step foot inside a boxing ring again.”

Another said: “No wonder this bloke pulled out of fighting Ford absolute shambles.”

Inside Fury's £1.7m Morecambe mansion that has gold radiators and curtains

And another said: “Did they even give him a camp?”

One remarked: “Jesus… I don’t want to know what Ford would have done to him had they actually fought!?”

Another chimed in: “I’m so glad he didn’t fight Martyn ford. Martyn ford would have killed him with one hit.”

One even joked: “I heard that the Iranian Hulk gassed out thinking about the ring walk.

“Can we stop hyping up this man please…I beg.”

Gharibi was embarrassed by his display, saying: “I have nothing to say but I am ashamed and I apologise to the Iranian people.”

The Iranian Hulk was ashamed with his disply[/caption]

His coach said after the fight: “I just wanted to five a brief explanation about the fight.

“The fight was set before Sajad came to me and he signed the contract.

“There was no way to cancel it unless he paid a big fine for the cancellation.

“We had a bad situation. Sajad came to Tehran for his training [but] we had a financial problem, the sponsor didn’t keep their word.

“In short, Sajad trained with me for only two weeks and I told him he was not ready to fight.

“But I had to be with him because he had to fight and somebody had to coach him.

“His opponent was the same level as Sajad but Sajad couldn’t do much, I am so sorry.

“I tried to help him but we had a really short time for it. I hope we can fix it in the future.”