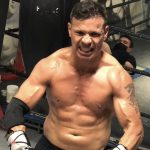 The middleweight division is buzzing with talented champions and lucrative potential bouts, and former champion and 154-pound titlist Sergio Martinez wants in on the action.

Argentina’s “Maravilla” has just announced that he will be facing England’s Brian Rose (32-6-1, 8 KOs) at Madrid’s Plaza de Toros de Valdemoro on September 18, in what will be his third comeback bout since his loss against Miguel Cotto back in June, 2014 at New York’s Madison Square Garden. Martinez is prideful, but no fool. He’s adding muscle to his frame, a concession to aging, because he won’t be as nimble afoot as he was back in the day.

In an exclusive interview from Madrid after a long day of training, Martinez, now 46, claims that this string of bouts is far from a farewell tour, although one bad result could easily turn it into just that.

“Something very clear for me: I am one defeat away from retiring for good,” said Martinez. “That’s how I see it, and this is my motivation. I either win, or I retire for good. And I have to do it right. I have to box well, I have to feel good in the ring, I have to handle the fight well. Because if I want to fight for a title at the end of this road, Rose cannot be a difficult opponent to me.”

Martinez (53-3-2, 30 KOs) returned to the ring in August 2020 both as a fighter and as a promoter, defeating José Fandiño with a seventh-round stoppage, and then moved on to beating Jussi Koivula four months later by TKO in the ninth, with both fights taking place in Spain, where Martinez has lived since 2002.

The fight is tentatively scheduled for 10 rounds at 160 pounds, and there may be a regional or minor belt at play from either the WBA (which ranks him at No. 3 in the world) or WBC, a signal that the former Ring champion may be eyeing a proper world title belt from either of those two organizations down the road. The website “A la vera del ring” was first to report this.

If that were to happen, it would be the ninth title fight for Martinez, who made six defenses of the Ring middleweight championship he acquired when he defeated Kelly Pavlik in 2010. He would later climb to the podium of the pound-for-pound rankings behind only Floyd Mayweather and Manny Pacquiao, among other accolades.

“The Lion” Rose, who had his last fight back in March, when he defeated Spain’s Jose Lopez Clavero, may seem a step down from the string of great opponents against whom Martinez built the most significant portion of his career. But Martinez claims he is the right man for this time and place.

“There was a list of opponents. We didn’t rule out anyone, but it is difficult for us to find opponents for me. It’s understandable,” he said. “There are young guys out there who think that I still represent a threat to them, and risking a defeat against a veteran like me is too much for them, because the risk is there for them. I am working well and I’ve been looking good lately, and for a young guy to lose against a 46-year old dinosaur like me would be difficult to digest,” he says, laughing.

Still, Martinez believes that, just as he was avoided and/or sidestepped by other fighters when he was in his prime, he will now find it difficult to reach his new goal, but this time for other reasons. Martinez hung up the mitts after the ’14 loss to Miguel Cotto, because his body wasn’t cooperating like it used to. Then, time away from the grind allowed him to heal up…and the urge to compete returned.

“Since I was a world champion, they are asking for a lot of money. I believe that this will be the norm until I decide to retire,” he claims, indicating that his team scoured Europe and Latin America for suitable foes only to receive laughable counteroffers and demands. “Finally, a few fighters from England became interested in the opportunity, and the one I liked the most was Rose. I think he will be a good test for me to see where I am standing right now.”

In his lone world title belt challenge, Rose, now 36, was stopped in seven rounds by Demetrius Andrade with the WBO junior middleweight title at stake, in 2014. And that was another plus that Martinez saw in him, considering how similar he considers himself with “Boo Boo” and his style.

“(Andrade) is an awkward southpaw, like myself”, said Martinez. “He attacks when he has to, but he is cold and methodical. Rose is too cautious for an English fighter, usually they are more aggressive.”

Rose’s aggression will require all of Martinez’s physical strength, something he lacked in the latter portion of his career – to the point of forcing his retirement. But, he claims, as it is usually the case with returning fighters, that this time is different.

“Right now, some nine weeks before the fight, I am working on my muscle volume, I gained weight in order to not give so much advantage in this fight,” said Martinez. “Ever since I climbed to the middleweight division (in 2009), I have always been much smaller than my opponents. And now I thought I could add muscle and power in order to be closer to them, in weight and volume. Obviously, intelligence and boxing skills are above that when it comes to winning fights, or a good strategy too. But it also is important for me to have a body that can support my strategy,” said Martinez, who still has a week left of muscle work before delving right into the technical aspects of his training.

Martinez goes on to credit his team with the new approach to his training and with his physical improvements, especially his lead trainer Tinín Rodríguez.

“David Navarro, my physical trainer, is also doing a fantastic job. The way I improved working with him is really indescribable. I have a great medical team. I can rely on all of them, they are very committed to my career and my progress towards at least earning the right to have a title fight,” said Martinez, who is still working as an actor in “Bengala,” a theater play that he intended to do only for one month and is now entering its second season. Sergio in happy mode after having his hand raised at the close of his December 19, 2020 bout versus Koivula.

Beyond all the positive notes about his preparation coming into this bout, Martinez is adamant about his statement that his comeback has a higher purpose, as opposed to being just an empty adventure from a bored former champ who can’t get boxing out of his system.

“I don’t want to waste time, I don’t want to give myself any false hope. I want to work on solid ground, and to demonstrate I am ready to face opponents who are better than the last two fighters I fought, and Rose is a step above Fandiño and Koivula. That’s the plan. I try to make decisions based on my performance. But I am conscious that I can’t skip any steps. I cannot think about ‘the day after’ this fight. Not at this stage in my career.”

The post Sergio Martinez returns with a mission: Win or retire for good appeared first on The Ring.

Boxing legend Mike Tyson believes he would’ve beaten heavyweight stars Fury, Joshua and Wilder in his prime
08:00TheSun.co.uk (sport)
Why are there two bronze medals awarded in Olympic boxing?
04:14TheSun.co.uk (sport)
Nicco Montano on 7-pound weight miss, UFC on ESPN 28 cancellation: I 'did everything in my power'
Yesterday 19:27MMAjunkie.com