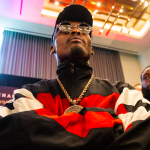 When Jermell Charlo was upset in a decision loss by Tony Harrison in December 2018, it was a tough blow. Gone were Charlo’s junior middleweight world title and undefeated record.

But Charlo had a rematch clause that he exercised and while it took longer than expected for the sequel to materialize due to Harrison being forced to postpone it because of an ankle sprain, when they did meet again one year later, Charlo avenged the loss by knocking out Harrison in the 11th round to regain the WBC belt.

Charlo was back on track and it was full speed ahead toward his ultimate goal of becoming the undisputed 154-pound world champion.

He got three quarters of the way there this past September when he squared off with IBF/WBA titleholder Jeison Rosario and knocked him out in the eighth round of a very impressive performance.

Charlo, who is also The Ring champion, has just one more belt to conquer, which he will attempt to add to his collection when he meets WBO titlist Brian Castano in a rare four-belt undisputed title fight in the main event of a Showtime-televised Premier Boxing Champions tripleheader on Saturday (9 p.m. ET) at the AT&T Center in San Antonio.

That is a big deal, Charlo said.

“This is a major fight because it’s history for me and my family,” Charlo said. “It’s huge for everyone that I represent, my city of Houston, and everyone that’s been supporting me for all these years. It was due time to get in there for this fight. Now, I’m here at this time and this moment. Nobody’s ever done it since those days (of Wright-Mosley) and when they did do it it wasn’t four belts.

“But the belts aren’t on my mind, the money – none of that is on my mind. What’s on my mind is the fight and my legacy and what I got to do when I get in that ring. I know the belts will be there. That’s trophies. … It would be a very special moment (to be crowned undisputed). Not a lot of people get these opportunities.” Jermell stated that his confidence level is high at the Thursday presser. (Photo by Amanda Westcott)

Charlo has fashioned a strong resume with victories over Rosario, Harrison in the rematch, former titlist Austin Trout and Erickson Lubin. The Texan has gained wide respect as the No. 1 fighter in the weight class. But Charlo (34-1, 18 KOs), 31, of Houston, knows a win over Castano (17-0-1, 12 KOs), 31, of Argentina, adding the final piece of the belt puzzle to his collection, would be very meaningful to how he is viewed both in terms of the here and now and in terms of his overall legacy.

“I’ve got belts on belts and he’s got one belt,” Charlo said. “I’m ready to take that strap too. I know what I got to do. I’ve been paying attention to what (Castano has) been doing. I haven’t just been sitting around since I fought Jeison Rosario. I’ve been working. I’ve added to my camp, added to my regimen. This is the fight, this is the one.”

Charlo also believes a victory will be important in how he is remembered long after he is done boxing.

“This could be the fight that puts (me) in the Hall of Fame,” Charlo said. “I mean, I won the world title in the same weight division with my (twin) brother (Jermall Charlo, who now holds the WBC middleweight title). That was a legacy moment. So, I mean, I don’t know when it’s gonna be enough for you (media) guys. But y’all not getting in the ring, so y’all don’t really understand. So, truthfully, to be honest with you, this fight is right. This is the one that I need. This is the one that I want.”

Trainer Derrick James, who also trains unified welterweight titleholder Errol Spence, loves that Charlo has the chance to go for the undisputed title to show people just how outstanding of a fighter he is. James insists that from his last fight to this event, Jermell has made obvious progress. (Photo by Esther Lin)

“We know the type of fighter that Brian Castano is and we’re preparing for the best version of that,” said James, Charlo’s trainer. “He’s a good fighter, a good boxer. Good technically. Jermell is going to show what we’ve been working on and how he’s progressed from his last fight until now. You will see his greatness.”

Showtime Sports president Stephen Espinoza has spent considerable time and network resources on the junior middleweight division to get to the point of an undisputed title fight and is proud to be part of delivering it to fans.

“People say nowadays the best aren’t fighting the best,” Espinoza said. “I’m here to tell you it happens. It’s been happening and right here is a great example of that. An undisputed title is at stake in the 154-pound division. It does not get bigger than this.”

As soon as Castano defeated Patrick Teixeira by surprisingly one-sided unanimous decision to claim take his title on Feb. 13, Charlo wanted the undisputed fight, which was relatively easy to make given that Charlo and Castano are both with PBC.

“This is a huge fight for me. This is something that the great Floyd Mayweather hasn’t accomplished (being an undisputed champion). This fight does cement my legacy.”

What Charlo also hopes the fight will do is earn him something that has generally been lacking for him and twin brother Jermall, and that is placement he believes they have earned on the pound-for-pound list of whichever outlet is putting it out.

“I’ve been down on the cards and come back with a knockout,” Charlo said. “I’ve fought some of the toughest guys. You got to remember some of the people I’ve fought and who they fought. It’s OK. I just know for a fact that I do get a lot of people that write me (about not being on the pound-for-pound lists). That don’t make me mad. You all don’t pay no bills in my house. You just create your list. That’s your job. I don’t care about that.

“I’m just gonna get in there and do some dangerous stuff. You can boycott me off your list. I don’t care about that. I’m 154 Jermell Charlo and I stand my ground for who I am and as long as I’m making the people around me happy — my peers and my coaches — and they’re satisfied with it and I give my all the rest don’t matter.”

But while Charlo said his pound-for-pound placement – or lack thereof – does not bother him, it was clear in his voice and his defensiveness that it did.

“I believe Canelo (Alvarez) is No. 1 right now,” he said. “(But) ya’ll have Terence Crawford really, really, really high. You look at his opponents? I know Kell Brook was a dangerous fighter that he beat but… my bad, I don’t want to throw out names. I don’t got time for the drama but I’m just keeping it real.”

The post Jermell Charlo says this fight against Brian Castano could put him in Hall of Fame appeared first on The Ring.