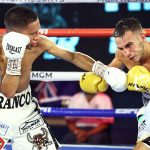 Junior bantamweight contender Joshua Franco is ready to put his disastrous rematch against Andrew Moloney behind him.

In June of last year, he floored Australia’s Moloney in the 11th round en route to scoring a well-earned unanimous decision. However their November 2020 rematch ended in chaos.

The 30-year-old Moloney (21-1, 14 knockouts) dominated Franco over the first two rounds behind an authoritative left jab. But referee Russell Mora, who has an ignominious reputation for botching calls, ruled that the swelling under Franco’s right eye was caused by a headbutt. Following a nearly 30-minute replay review, the bout was ruled a no-decision, much to Moloney’s chagrin.

“They took this away from me. The injury was caused by a punch. I can’t believe this,” he stated following the ruling.

“I was in control of the fight and on my way to a clear victory. I deserved this win. I landed 50 punches on that eye. It was not even close.”

We asked Franco, ranked No. 6 at 115 pounds by The Ring, to tell his side of the story.

“Yeah, for sure [the damage was caused by] a headbutt,” he stated. “There’s no doubt about that. And after the headbutt, my right eye just continued to get worse from all the hits I was taking; I couldn’t see out of it.”

Franco (17-1-2, 8 KOs), 25, of San Antonio, Texas, later admitted to The Ring that he made “a terrible mistake” coming into training camp for the rematch.

“I came into training camp really heavy. Because of that, I ended up having trouble making the weight but, this time, I came back lighter. I disciplined myself and I’m looking to look sharper and stronger in the ring and to put this trilogy to rest.”

Was Franco simply celebrating his victory from the first fight for too long?

“That’s exactly what happened,” Franco revealed. “I was eating too much and enjoying myself too much. I got off track for a bit but now I’m right back where I need to be. I’m focused; my head is on right and I’m ready to go.

And while Franco has only been in 20 pro fights (21, if you count the no-decision), Saturday, August 14 will mark his second trilogy as he and Moloney will settle the score in a scheduled 12-round “Top Rank on ESPN” headliner from Hard Rock Hotel & Casino, in Tulsa, Oklahoma.

Franco then acknowledged he was slightly surprised at how well Moloney, ranked No. 8 by The Ring, performed in the second fight but, at the same time, was not shocked overall.

“But he was the champion before me and he really wanted his [secondary] belt back. He has tremendous heart and you can’t take that away from him.

“But my plan is to go in there and dominate and to prove to Andrew Moloney why I’m champion and to remind him that I’m the man.”

You may have missed:

ANDREW MOLONEY LOOKS TO RIGHT A WRONG VERSUS JOSHUA FRANCO

The post Settling the score: Joshua Franco vs. Andrew Moloney on August 14 appeared first on The Ring.