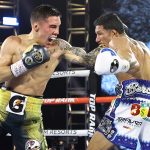 Oscar Valdez is a little deceiving. He’s listed at 30 years old, yet he looks like he’s 12. He was supposed to be the smaller fighter when he took on defending WBC junior lightweight titlist Miguel Berchelt, yet Valdez had the bigger punch.

The only thing missing, regrettably, was the crowd, because Valdez and Berchelt certainly put on a crowd-pleasing show.

“There’s nothing better in life than proving people wrong,” Valdez said. “I have a list of people who doubted me. My idols doubted me. Boxing analysts doubted me. They said Berchelt was going to knock me out. I have a message to everybody: Don’t’ let anyone tell you what you can and can’t do.

“I’m so happy right now, I can almost do a backflip like Teofimo Lopez.

“I want to take this belt home, and I’m happy for that. Any champion out there… I heard Shakur Stevenson wants to fight. Let’s do it. I just want to keep on fighting and give the fans what they want.”

Making his seventh title defense, Berchelt started the first round relaxed. Valdez seemed to be on the anxious side. By the second, however, Valdez, the former WBO featherweight titlist, began connecting, forcing Berchelt’s nose to bleed.

In the fourth, Berchelt could not catch Valdez. Then with 1:16 left in the fourth, the punch that changed the course of the fight—and Valdez’ future—landed in the form a perfect left hook that stunned Berchelt.

With :49 left, a Valdez left uppercut sent Berchelt reeling into the ropes. Yet, Berchelt managed to stay on his feet. In the waning seconds of the round, Berchelt was called down by referee Russell Mora.

Clearly in trouble in the fifth, Russell warned Berchelt that he had to “show him something,” if he was going to allow him to continue.

Between the seventh and eighth, Berchelt wore the look of a defeated fighter. But his heart said something else.

In the eighth, Valdez was made Berchelt look like his feet were in sand. Valdez switched hands, and he had Berchelt confused. Valdez got off to another good start in the ninth, while Berchelt clearly had no zeal on his punches.

With 1:08 left in the ninth, Valdez scored his second knockdown with another left uppercut. Berchelt was clearly in trouble and ready to go.

Early portends that something big was coming in the 10 th came just 30 seconds into the round, when Valdez smoked Berchelt with a left to the head. Once again, Berchelt’s legs wobbled. Mora began taking a close look at the defending titlist. With both eyes swollen, Berchelt was eating power shot after power shot.

Then the explosion arrived as the bell sounded—a looping left straight to Berchelt’s face send him face down.

Joseph Santoliquito is an award-winning sportswriter who has been working for Ring Magazine/RingTV.com since October 1997 and is the president of the Boxing Writers Association of America. He can be followed on twitter @JSantoliquito.

The post Oscar Valdez pulls off a stunning upset by stopping Miguel Berchelt in 10 appeared first on The Ring.