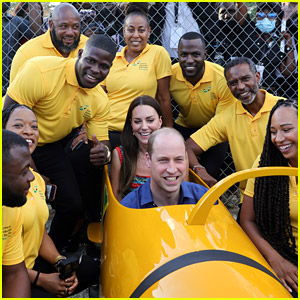 It was a full day of activates for Prince William and Kate Middleton in Jamaica on Tuesday (March 22)!

The Duke and Duchess of Cambridge headed to Trench Town on the island nation, which is the birthplace of reggae music.

Ahead of a tour of the Trench Town Culture Yard Museum, Kate and William met with some young soccer players on the pitch, where William even played a game with them all, before meeting pro soccer stars Raheem Sterling and Leon Bailey.

William and Kate also got to meet the Jamaican Olympic bobsleigh team, who competed in the Olympic Games in Beijing, and took the opportunity to slide into a bobsleigh for a few photos.

Later on, while touring the museum, Kate and William joined in some live music and played the drums while learning of the impact of reggae music around the world.

If you missed it, Kate and William both payed homage to the Jamaican flag with their arrival looks.