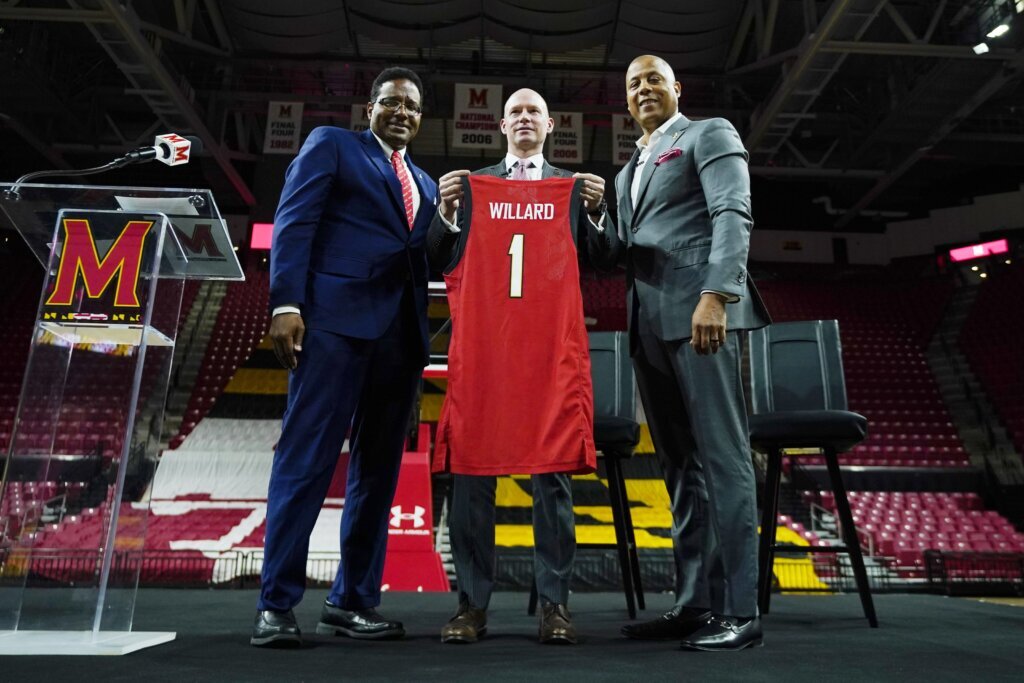 Winning in college basketball is a difficult task.

Only 68 of 358 Division I schools make the NCAA Tournament, and even those who make the Big Dance are viewed differently with a quick exit (Iowa and Wisconsin giving the Big Ten a couple of black eyes over the first weekend of the Tournament). And once a recruiting class that has the fan base happy is signed, the pressure is on to get an even better class next year. But it’s tough to lose the opening press conference. And short of pulling a Jim Zorn and saying how much his family loves “those Maryland Crab Sticks” or “We’re going to bring back an ACC Championship!” new Maryland head coach Kevin Willard was not going to lose this press conference.

In fact, he won it going away by hitting all of the right notes. Willard praised the University of Maryland as a “top 10 job” multiple times, and invoked the program’s glory era by referring to watching the Terrapin teams of the 90s coached by Gary Williams. He talked about how “the swagger” was going to be brought back and that he was going to work hard (again, multiple times). Willard showed respect to his former employers at Seton Hall and appreciation for the Pirates’ longtime apparel partner Under Armour. Even though he opened his remarks by saying he “didn’t do scripts in the northeast,” one couldn’t have drawn up a better play on the white erase board in the huddle.

But unlike the right play Willard will have to call with under a minute left in regulation (or overtime) that will determine a win or a loss, an NCAA trip or an NIT bid, or a potential championship for Maryland, this was just the first play of a long (seven-year contract) game. And the “forty minutes” that it’ll take to determine whether Kevin Willard wins or loses with the Terrapins will take a while to be played out.

What will the expectations be? This is a fan base and administration accustomed to winning. “We intend to position our men’s basketball program, year in and year out, to win conference titles and National Championships,” Athletic Director Damon Evans said when introducing Willard. “Because simply put, that is what Maryland basketball is all about.” Given the talent pool of the area and resources of the Big Ten, those are reasonable aspirations. Reasonable expectations at Maryland should be getting to Saturday in the conference tournament (meaning the semifinals) and the second weekend of the NCAA’s (meaning the Sweet Sixteen) regularly (once or twice every four years). Since 2004, the program has reached the ACC or Big Ten Semifinals three times (2009, 2015, and 2016) and the NCAA Regional Semifinals just once (2016). Willard will have 2-3 years to show progress toward those goals.

Will he recruit well? While the Terps’ recruiting classes averaged between fifth and sixth best in the Big Ten (according to 247sports.com) and 33rd nationally during the years 2012-21 under Mark Turgeon, those that got away (from Luka Garza to Hunter Dickinson) seemed to cast a shadow on the program. The new coach hopes to keep the best players inside and around the Beltway in the area. “What I love about the DMV is that not only does it have great players, it’s extremely well coached at the high school and at the AAU level,” Willard said. “So my staff will reflect what this area is and will definitely be involved with guys that grew up here, guys that went to college here, guys that know the AAU and high school programs really well.”

The transfer portal is a new tool at the hand of coaches nowadays; for example, the Terps brought in six transfers last offseason while four players transferred out of the program. And after assembling a staff, that’s the next thing on Willard’s plate. “I think he’s going to figure out the guys on the team coming back number one. He’s got some good players coming back,” longtime play-by-play announcer Johnny Holliday said. “He wants to make sure he gets the right kind of guys that fit into the Maryland philosophy.”

Kevin Willard will have to sell the program to more than just recruits in the DMV area and beyond. Last winter the team averaged 13,052 fans at its 18 home games (including a little over 10,000 for the home conference opener), and since joining the Big Ten the school has averaged 14,868 in the 19,990-seat Xfinity Center (not accounting for the pandemic 2020-21 season). It’s a challenge to compete for fans in a busy area like Washington that has multiple pro teams to follow as well as a slew of other entertainment options. “Well, you have to work really hard. And that’s the thing he had to do with Seton Hall, because they didn’t have all of the assets that some of those Big East teams did,” Hall of Fame Coach Gary Williams said. “I think the big thing is it starts with your players. Players sell your program for you, too, then you get to the alumni, you get throughout the state. We’re in a ‘pro area,’ there’s no doubt about it, so they like winning. So if you find a way to win, that brings it all together.”

Kevin Willard has already won the introductory press conference. The next game is putting a staff together and recruiting. Then the real games begin this fall.