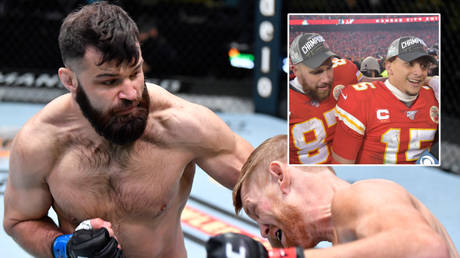 After asking for a date with pop queen Miley Cyrus after his last win, UFC star Julian Marquez has gone further by challenging the NFL's Patrick Mahones and Travis Kelce to a badminton match to decide the true king of Kansas City.

The 30-year-old Marquez, who is known to some as the 'Cuban Missile Crisis', picked up the third win of his UFC career on Saturday night when he sank in a second-round rear-naked choke to coax a tap from experienced veteran Sam Alvey in Las Vegas – before using his time on the mic afterwords to issue a very unusual challenge to a host of his fellow Missourians.

"I am the entertainment you pay to see, but anything you see I gave to you for free, so now I have a callout to give out to everyone from Kansas City," Marquez announced live on ESPN following his fight.

"You guys know I'm the baddest man from Kansas City, the baddest middleweight in Missouri. It is my time right now.

"So Travis Kelce, Patrick Mahomes, Tyreek Hill: I challenge you guys to a badminton or pickleball competition. Straight up, if you guys want to see who the pound-for-pound champ is of Kansas City, you're coming after me.

"This magnificent beard tops all that you guys have to bring."

Fight fans are well accustomed to mixed martial artists calling their next shot after a successful cameo in the cage, but it isn't often that these challenges cross over into different sports altogether.

But it seems that the targets of his dramatic callout – the superstar trio who helped the NFL's Kansas City Chiefs to two consecutive Super Bowl appearances – are more than down for the challenge.

We can settle ALL this up at Chicken n Pickle!! LFG!!! pic.twitter.com/KlNUR4NHdK

"Need a couple of weeks but I'm always down for a challenge," replied quarterback Mahomes, along with a trio of laughing emojis, while Kelce also indicated his interest.

"We can settle all this up at Chicken and Pickle,"  wrote the game's best tight end. "Let's f***ing go."

It remains to be seen if the badminton skills of Mahomes and Kelce can rival the heroics they perform on a football field on a Sunday or even what exactly 'pickleball' is, but it seems that the battle of Kansas City is very much on.

Marquez's unique callout comes just months after he asked popstar Miley Cyrus to be his Valentine after another submission win in February – on that occasion against Maki Pitolo.

"Miley Cyrus, will you be my Valentine?"@JMarquezMMA used his mic time for an unconventional callout ???? #UFC258 pic.twitter.com/lWdwMRpoNS

Shave an MC into your chest hair and I am YOURS ❤️ Happy VDay and Congrats my love!

"I've been waiting 31 damn months to get on this mic and to call these people out right now," Marquez announced in February.

"This is my time to shine. So, Miley Cyrus: will you be my Valentine?"

After shooting his shot, Cyrus was quick to respond.

"Shave an MC into your chest hair and I am YOURS," she wrote. "Happy VDay and congratulations, my love."