Sponsored
Ru24.netNews‑life.proNews‑life.org29ru.net123ru.marketSportsweek.orgIceprice.info123ru.net
News
The twenty-first match in Round One, we have the Lotus 49 vs the Aston Martin DBR4.

Lotus 49 (grandprixhistory.org):
Announced in 1963 the 3-liter Formula was now one year old and after an unsuccessful 1966 season using a variety of engines including the H-16 BRM, Chapman was desperate for a new power source. Most observers felt that a 12 cylinder engine would be bare minimum required for the 3 liter Formula and BRM continued with their 16 but the 8 cylinder had many adherents back in Detroit. Colin Chapman was also in favor of a V8 which could be made smaller and lighter. Like the previous year's Type 43 the new car would have a monocoque chassis where the engine served as a stressed member. Designed by Maurice Phillippe to work hand in hand with the new engine the Lotus 49 was kept as simple as possible. The main connection between the engine and the chassis was via two bolts spaced 9 inches apart at the bottom of the monocoque with additional connections at the reinforced cam covers.

For 1967, Graham Hill was added to the team at the instigation of Ford. Starting out at Lotus he had left the firm in 1960 to join BRM a fact that was never totally forgiven by Chapman. Early testing of the new car was entrusted to Hill as Jimmy Clark had become a temporary "tax exile" during this period. The additional power was at first obvious and Hill would later talk of a wooden board placed behind the driver to compensate for the increased acceleration. This sudden surge of power came at 6,500 rpm and took some getting used too. Until the throttle linkage was upgraded the car had a distinct feeling of an on and off switch. Clark would complain that it was easier to get the maximum out of the Lotus 25 or 33 than the 49. This may well have been the musings of a driver contemplating the end of his career which he would not live to see. The difference in Formula's was more than just a matter of engine power. Rather than finesse it was more a matter of the driver putting his foot down on the accelerator sooner and longer. Clark always an artist in a car may have seen his advantage disappearing.

The new engine was finally ready for the third race of the season, the Dutch Grand Prix at Zandvoort. Graham Hill started from pole position while Clark suffering from teething problems during qualifying was stuck in the eighth position. Hill led from the start but was forced to retire on the eleventh lap due to a broken camshaft. Clark was able to make his way to the front where he scored Ford's first victory in its debut race. Clark's engine was stripped down after the race and it was found that its timing gear was damaged. With these the only two engines in existence much work was required to get the cars ready for the next race.

The most important race of the year was the U.S. Grand Prix at Watkins Glen for obvious reasons. In front of all the Ford brass it was decided that the drivers would compete under team orders with Hill winning the coin toss. In the race Clark took the early lead but soon let his teammate pass. On lap 40 Hill's car began to slow with clutch problems. Clark dutifully slowed also but under the threat of Amon's Ferrari was told by Chapman to assume the lead. The unlucky Amon was forced to retire 13 laps from the finish and the Lotus cars were again 1-2. Clark again slowed in order for Hill to catch up but with the race almost over the sight of the leading car traveling so slowly would have been too much of an affront to the other competitors (did somebody say Ferrari?) so Clark won the race that was to have been Hill's. Clark showing his class immediately went to Hill after the race to apologize but any dispute between these two great champions was short lived and Ford had their 1-2.

Aston Martin DBR4 (ultimatecarpage.com):
Shortly after buying Aston Martin and Lagonda, David Brown embarked on a very ambitious journey into motorsport, which would come to a glorious conclusion in 1959. Aston Martin's first efforts were with modified road cars, but they soon stepped up the plate and designed a series of purpose built sportsracers. The ultimate goal was an overall victory in the already legendary 24 Hours of Le Mans race. During this period the possibility of entering Formula was discussed more than once and in 1955 a car was actually tested and raced in the Tasman Series. David Brown's team remained hesitant as the elusive Le Mans victory was within grabbing distance and any distractions could prove to be fatal.

The tests and races had proven sufficiently successful to convince the team to start the development of a full blown Aston Martin Formula 1 car later that year. Around the same time the development of the DBR1 sports racer also commenced and that still had top priority. While this contributed to postponing the introduction of the new Formula 1 car, it was arguably also essential to the successes scored in the last three years of the decade culminating in the 1959 Le Mans win. It was also at this time that Aston Martin finally entered Formula 1 even though the DBR4 single seater had first been tested late in 1957. Although only a few years had passed since the development had started, Formula 1 was undergoing a complete revolution and the unfortunate Aston Martin was outdated before it first turned a wheel in anger.

Technically, the DBR4 was very similar to the successful sports racers, but of course more tightly packaged to meet the single seater requirements. The chassis was a straightforward spaceframe, suspended by wishbones and coil springs at the front and a DeDion axle at the rear. It was the very last new Formula 1 car to use this elaborate suspension, which was discarded by most in favour of completely independent wishbones. The engine was the familiar twin-cam straight six downsized to 2.5 litres. Breathing through three Weber Carburetors, the engine produced as much as 280 bhp according to factory claims, which in those days were rarely close to the truth. The engine was mated to a David Brown five speed gearbox. While pleasing to the eye, the aluminium body was not the most aerodynamically efficient shape on the grid and the big air-intake and vertical windscreen must have really slowed the cars down.

Before the 1959 season, Jack Brabham had agreed to drive for Aston Martin team, but fortunately for him he was picked up by Cooper and went on to score his first World Championship. This 'left' the British team with their Le Mans winning drivers Carroll Shelby and Roy Salvadori to race the DBR4s. Salvadori made a promising debut at the 1959 Tourist Trophy by finishing second behind Brabham in the Cooper. This proved to be the sole highlight in the Aston Martin Formula 1 campaign as the overweight and underpowered DBR4 struggled against the more advanced opposition. The drivers were frequently forced to push the cars harder than they could handle to keep up with the rest, which resulted in numerous retirements. For 1960 the lighter, independently sprung DBR5 was tried, but the sport had clearly moved on and front-engined Grand Prix cars were outclassed on almost every track now. After two brief years, Aston Martin was out of Formula 1 again and for good. The cars were later raced in the Tasman Series, surprisingly with some success.

Only four DBR4s were constructed, one of which was used as a basis for one of the two DBR5s for 1960. Both the DBR5s were scrapped, but the three DBR4s are understood to have survived. In more recent years at least one replica was also built. 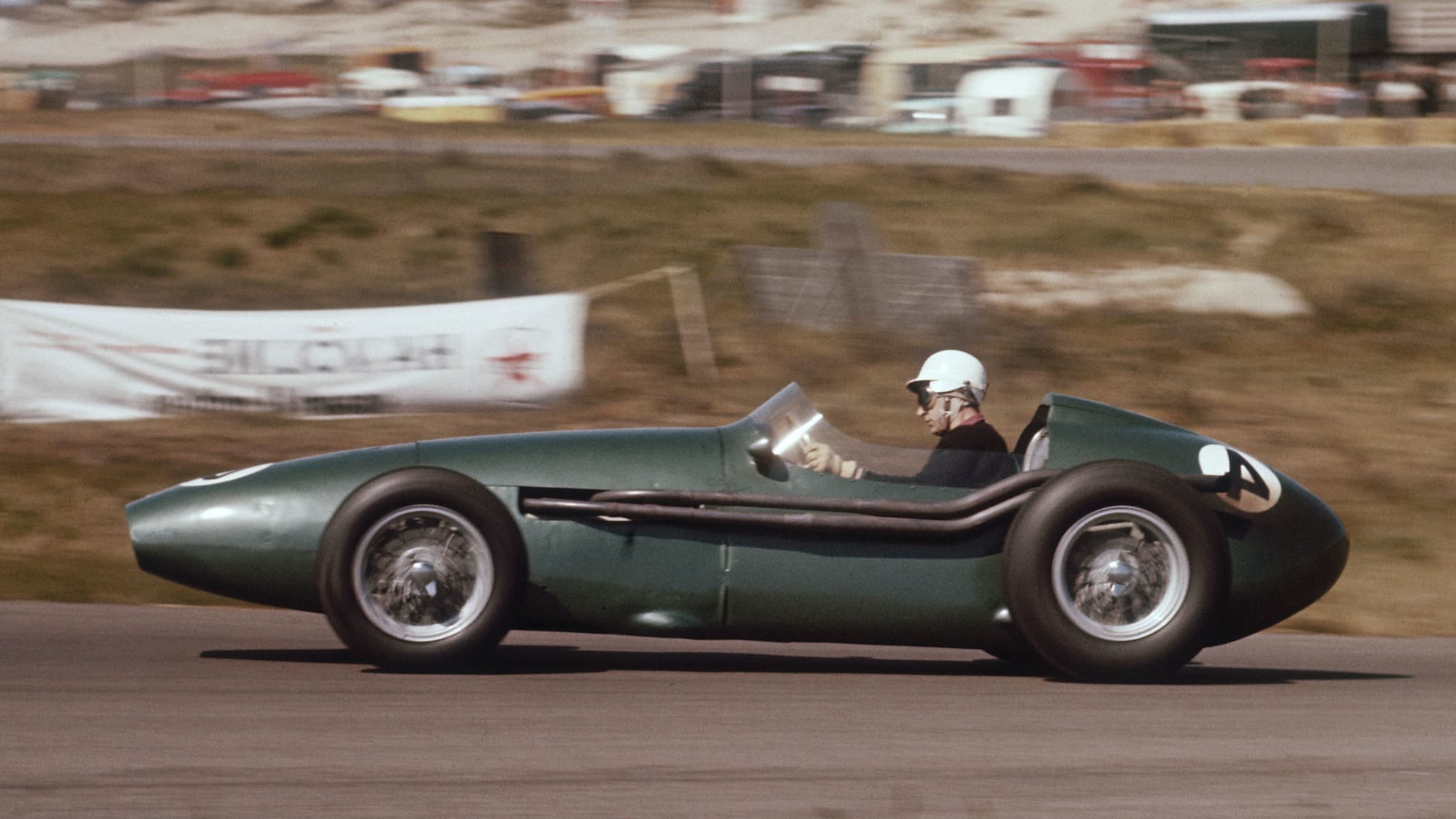