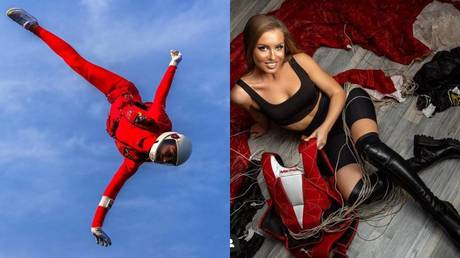 Russian skydiving champion Anastasia Barannik has shot to internet fame after showing her mind-blowing sky dances, which include some insane acrobatic elements all performed while airborne.

The 24-year-old, who won bronze at the skydiving World Cup in freestyle in 2019, is dreaming of repeating her podium finish at the 2021 World Championships, which are set to take place this coming summer.

Barannik is preparing intensively for the upcoming global tournament, having spent time at a training camp in Dubai, where she did up to eight skydives per day, jumping from a height of 4,000 meters (13,000ft).

The athlete is an active Instagram user and gladly shares videos online of her breathtaking efforts, attracting complimentary comments from her followers.

Along with skydiving, Barannik also wants to embark on a modelling career, accepting offers from sponsors and agencies to advertise various goods and take part in promotional events.

But her biggest dream isn't connected with sport or fashion: the daredevil sky queen wants to go to the International Space Station and has already undergone the necessary medical tests to achieve her goal.

Barannik is taking part in a contest launched by Russia's Channel One, which is holding a nationwide casting search for the lead women’s role in a movie that will be filmed in space.

Thousands of contestants have submitted applications for the national selection process, in which an opportunity to visit the International Space Station is at stake.

Barannik has successfully passed the medical tests required to be a contender, but said it will be difficult to be approved for the role, as thousands of other girls remain in the contest for the coveted trip to space.

“Not long ago I visited Star City, where I underwent trials for cosmonauts, including centrifuge, vestibular training machine and flight in aerobatics mode on an IL-76 jet aircraft,” Barannik said.

"My medical test results were fine, so I have passed them. But I understand that thousands of talented and beautiful girls are among the contenders for the role, so I don’t want to predict anything beforehand."